skip to main | skip to sidebar

A movie is worth a million words. It's iPad Magic at its best. Thank you David Smith, of SLMUG for the link.
Posted by Bill George at 9:25 AM No comments:

I just installed the Macintosh App Store program and found it very stable and compelling. Last Wednesday (5 Jan 2011), the Mac App Store app became available after installing updates to the latest version of Snow Leopard and noticing the new Mac Store App Icon in my dock. (Snow Leopard IS required to install the Mac App Store on your Macintosh). I immediately downloaded a free utility Caffeine, that lets you temporarily suspend screen savers. Worked like a charm.

To test whether I could download one paid app to multiple Macs (I have 3 older Macs) with no extra charges, I downloaded 50% off Angry Birds at $4.95 to my ancient MacBook Pro. I moved to my second machine (an iMac) and started the Mac App Store download of Angry Birds. It's a little disconcerting because you have to purchase the same app, enter your password, THEN, it tells you you already have the app, and that the download is free. So don't make a mistake or you may make an unwanted purchase. I couldn't resist a Mac Web Site editor (Rapidweaver) that was 50% off at $39 and another $4.99 app Courier, a utility to simplify upload content to multiple Web 2.0 sites like Flicker, Facebook, Youtube, Mobileme and more.

The search for apps is similar to that experienced on the iPhone and iPad so I was using the Mac App Store very quickly and effectively. Apple claims over 1 million downloads the first day, so it looks like a hit AND it's a lot of fun! The 7.4 mb Mac Store App is called "App Store.app" in your Application folder.
Posted by Bill George at 10:36 AM No comments:

I'm obsessed with managing my Mac windows and this program seems to be the quickest and most intuitive, I've found. You can easily try it out, receiving a nag message every so often to purchase it for $7. Simply click/drag your window to the left-hand side of the screen to fill the left 1/2 of the display. Ditto for the right-hand side of the screen. To make your window fill the display, drag the window to the top of the screen. Very simple. It's said to mimic the way Windows 7 works. If so, good for Windows 7! You can download at http://irradiatedsoftware.com/cinch/.
Posted by Bill George at 10:03 AM

The iPad has arrived! It is producing manic depressive behavior like "It's the great new computing Paradigm!" vs "It's a Maxipad, (see the Mad TV parody of a Maxipad commercial", or "OMG I've got to get one, but it's got to be a 3G!" vs "It's only an overweight iPod Touch", or "Did you see they have a slot for a CAMERA?!", vs Apple stock plummeted the first couple days after the announcement" ... and on and on and on. Mashable.com is an excellent source of iPad news. One of the earliest and best article I've seen about the iPad says that the iPad category fits neatly between an iPhone and a Mac, being built to be a media consumption device, not a media creation device.
Posted by Bill George at 2:13 PM 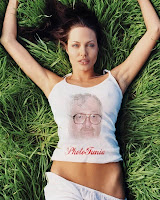 I just heard about this great web site http://www.photofunia.com on Leo Laporte's Net at Night Podcast #136. It's pretty awesome. You take a picture of yourself, or someone else, and merge it with another photos. There is a large selection to choose from. This internet-thing really has some fun stuff, eh?
Posted by Bill George at 3:52 PM No comments:

TwoUp is a great free utility I use to help with window-management on the Macintosh. It's actually a stripped down version of a program with more advanced features that's not free, which is a great way to market products. It's from Irradiated Labs at http://www.irradiatedsoftware.com.

It's very simple to resize an application window, pressing CTRL, OPTION and COMMAND keys all at once (they're right next to each other) and one of the ARROW KEYS. It causes the application window you're using to re-size to the left half, right half, top half or bottom half of your screen. If you want to work side by side with two finder windows or a finder window and a text window, for example, just select the window and press the appropriate keys. It works with most Mac programs, but check the exceptions in the documentation (two are Microsoft Word and Excel 2004).

I discovered the Diablo Valley Macintosh User Group last year and thought I'd share it with you. They seem to be one of the most active groups in the East Bay, having a number of special interest groups (SIGs) and a web-based Bulletin Board with many forums on many topics. The SIG I've been attending regularly is the Genealogy SIG, headed by Verner Laursen. They also have an interesting iLife SIG.
Posted by Bill George at 2:07 PM No comments: